Almost everything we use today relies on raw materials in the design, manufacturing and development phases. As the world continues to experiment with the use of raw materials, Oleum seeks to keep up with continually changing requirements.

We understand the significance of relying on raw materials to promote sustainability and an environmentally conscious future. We strive to offer chemical and technological solutions that will help our clients expand and grow their product range and services in the most efficient manner.

Propionic acid comes in the form of a clear liquid with an unpleasant and somewhat pungent odour. This raw material has similar physical properties to smaller carboxylic acids, fatty acids, as well as acetic and formic acids. It is also miscible with water, however it can be removed by adding salt. 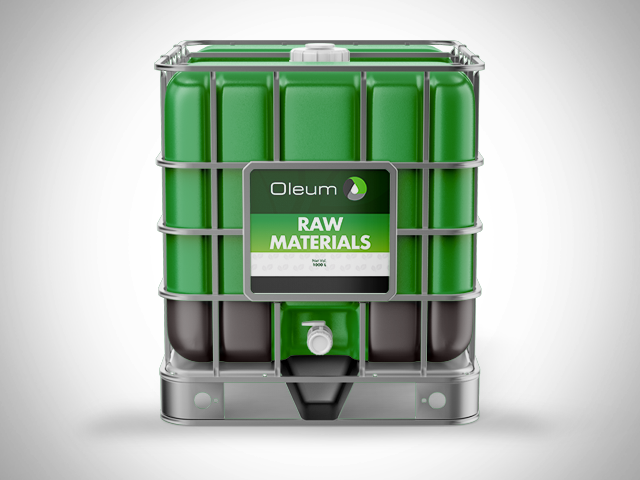 Because Propionic acid conforms to the same general properties of most carboxylic adics, it is known to inhibit the growth of mould and some bacteria between the levels of 0.1 and 1% by weight. It is used as a preservative for both animal feed and food as well as in Agricultural adjuvants.

Glycolic acid is the smallest a-hydroxy acid, and retains no colour or odour. It is utilised in various skincare products, due to it being highly soluble in water. It can also be found in natural sources, such as sugarcane, pineapple, grapes, cantaloupe, beets and sugarcane.

It is used in the textile industry in the dying and tanning process, as well as added as a flavouring agent or preservative in the food industry. It is also added to solvents and additives to improve the flow and gloss in the application of ink and paint.

Phosphoric Acid is a clear, colourless and odourless liquid that retains the chemical formula H3PO4 and has a syrup-like consistency.

It is usually produced in two different ways, one being the thermal process and the other the wet process. The wet process is favoured in the commercial sector, compared to the more costly thermal process that is used within the food industry, due to the fact that it produces a higher quality product.

The main industry that phosphoric acids are utilised in is the production of fertilizers. This consumes approximately 90% of the material worldwide. However, it also has many other uses in rust removal, food additives, electrolytes, dispersing agents, home cleaning and the industrial sector.

Guar Gum is primarily contracted from the endosperm of guar beans. These seeds are milled and screened to obtain the guar gum powder. The guar bean is notably grown in the regions of Pakistan and India.

Guar Gum has found purpose in the carpet industry, as well as the paper, explosives, pharmaceutical, cosmetics and hydraulic industry. However, the largest market for it sits in the food industry. From baked goods to dairy products, meat, condiments and soup – the Guar Gum is a significant raw material within a number of industries.

Hydrogen Peroxide 50% is a powerful oxygen bleacher. It assists in both removing stains and whitening a wide range of fabrics, this makes it suitable in circumstances where chlorine based bleaches may be inappropriate.

Sodium Hypochlorite is a chemical compound that is created through a combination of sodium cation and a hypochlorite anion. When dissolved in water, Sodium Hypochlorite is more commonly referred to as liquid bleach or simply, bleach. It is often used as a bleaching agent or disinfectant in a number of commercial or residential applications. Sodium Hyphochlorite can be used as a bleaching agent, a disinfectant, stain remover, deodorizer, a nerve agent in endodontics and in water treatment.

Sodium Tripolyphosphate is an inorganic material with the formula Na5P3O10. It is often produced on a large scale, being a crucial component of many domestic and industrial products. Two million tonnes of the material are produced annually, as the method involves controlled conditions and heating a stoichiometric mixture of disodium phosphate, and monosodium phosphate. The majority of it is utilised as a component within commercial detergents, serving as a water softener. It can also be used as a seafood, meat and poultry preservative.

Sorbitol is a sugar based product that retains a sweet taste. It can be obtained by a reduction of glucose, which alters the aldehyde group, which then becomes a hydroxyl group. This raw material has a number of uses – a major one being a sugar substitute. In many foods and products, Sorbitol may be listed as the inactive ingredient, and it retains approximately 60% the sweetness of sucrose. When mixed with other substances, Sorbitol can also have a number of industrial uses.

Lecithin is a natural raw material comprised of a mixture of phospholipids and oils that have been extracted from soya beans.

Soy Lecithin is a common ingredient found in processed foods and has high levels of Choline. Choline is a micronutrient, known for its advantages in human heart health and brain development.

As well as Soy Lecithin being a common food additive, this material is also beneficial in the pharmaceutical industry, acting as a wetting and stabilizing agent that can help in emulsification and encapsulation. Soy Lecithin can also be used in the agricultural, plastics, paint and animal feed industries.

Esters are chemical compounds that have been derived from an organic or inorganic acid.

Methyl Esters are a specific type of fatty acid ester that is derived from fats and methanol. They are commonly used to produce detergents and biodiesel and are typically produced by an alkali-catalysed reaction that has occurred between methanols and fats. Ethyl Esters are made when one fatty acid attaches itself to one ethanol molecule. They are usually not found in nature, but created through a process of chemical synthesis.

Our friendly experts are always more than happy to help. To contact us: