Surfactants are substances that reduce the surface tension of a liquid in which it is added. They work to break down the interface between water and oils or dirt, holding them in suspension to create an extraction. Surfactants play a crucial role in a variety of occurrences, including wetting, surface tension reduction, emulsification, dispersion formation, foaming, micelle formation and the adjusting of solution rheology.

Oleum understands the importance of these in industry, stocking and distributing a broad range of surfactants Australia wide. We pride ourselves on delivering the highest quality products that meets the latest industry requirements. 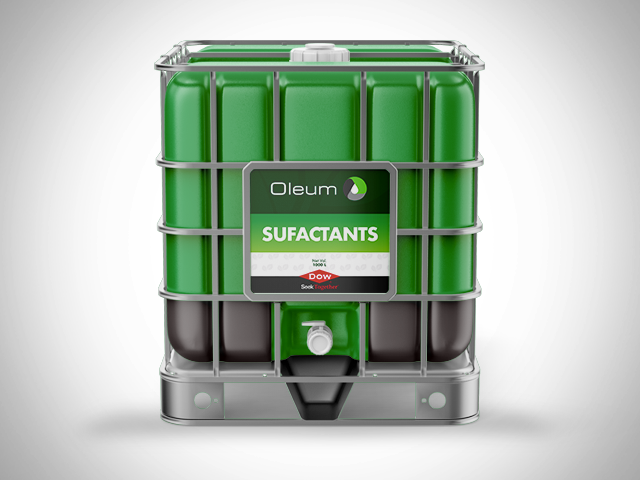 Nonyl Phenol (NP) and Nonylphenol Ethoxylates (NPE) are two of the most widely used members of the alkylphenol and alkylphenol ethoxylate family of non-ionic surfactants. Because they have a broad range of uses and high demand, NP and NPE are often produced in large volumes.

Nonyl Phenol is found in products such as antioxidants and emulsifiers, through to lubricating oils and detergents. As such, products containing these surfactants are used within many industry sectors, from textile processing, pulp and paper processing, resins, protective coatings, oil and gas recovery,steel manufacturing, power generation and agricultural adjuvant products.

The main use for Octyl Phenol is as an intermediate when producing phenol and formalehyde resins, as well as in the manufacturing of octylphenol ethoxylates. As a surfactant, Octyl Phenol is mainly used in rubber, pesticides and paints.

Dodecyl Phenol is a clear, straw-coloured liquid with a distinct, phenolic odour. The dodecyl group is a chain of 11 to 15 carbons that reflect the starting olefin which are already considered highly branded in structure.

Lauryl Alcohol is a clear, oily liquid with a melting point of 24°C to 27°C. It is a synthetic fatty alcohol, similar in physical and chemical properties to natural alcohols such as coconut oil. The primary use for this alcohol is as a raw material for the production of fatty sulfate salts and alcohol ethoxylates, however it can also be used to improve the formulas and dispersion characteristics in cosmetics and personal care products.

Alcohol C9-C11 is a colourless liquid with a mild odour, and is considered to be a highly active nonionic surfactant. The product itself is stable, both in aqueous acidic and alkaline solutions, this allows for it to be used within a wide range of products. Alcohol C9-11 is particularly useful in oil-based systems, consistently utilised as a wetting agent and emulsifier within household cleaners, car washes and wax strippers. It provides exceptional detergency as well as demonstrating a biodegradable profile.

Cetyl stearyl is a comprised of a mixture of fatty alcohols, all of which can be derived from both natural and synthetic sources. It is used as an emulsion stabilizer opacifying agent, coming in a white, waxy solid flake form. It can be used in water-in-oil emulsions and is commonly found in hair conditioners and other hair care products. Cetyl Stearyl is a very effective thickener, derived from palm oil to which alcohol has been added. Cetyl Stearyl alcohol can be used as an effective moisturiser, emollient and thickening agent.

Oleyl Cetyl alcohol when stored at room temperature takes the form of a waxy white solid or flakes. It is classified as a fatty alcohol with the formula CH3(CH2)15OH. It is used within the cosmetic industry, lending itself as an opacifier in shampoos, or as an emollient, emulsifier or thickening agent in the manufacturing of skin creams and lotions.

As a surfactant, Tallow Amine is a hard fat, consisting predominantly of oleic, palmitic and stearic acids. To obtain Tallow Amine, it must be extracted from the fatty deposits of animals, particularly from the fatty tissues around the kidneys of cattle and sheep.

Tallow is used in the production of soaps, leather dressing, lubricants, candles and food. It is also used in producing synthetic surfactants as tallow-based alkyl amines are widely used in the synthesis of organic chemicals. They can also be used as a dispersing agent, acting as an internal or external lubricant that provides benefits in polymer production. This can help to facilitate and stabilize the dispersion of solid compounding materials, decreasing friction and enhancing the processes of the polymer surface, this helps to increase colour stability and aids corrosion prevention.

A block copolymer is a copolymer that has formed when two monomers cluster together to form blocks of repeating units. These are normally prepared by the controlled polymerization of one monomer, which is then trailed by chain extension with a different monomer, resulting in AB or ABC block copolymers. Common block copolymers exist in SBS rubber. This is used in tyre treads and also in the soles of shoes.

Oleic Acid, or commonly known as Omega-9, is an oily liquid that is pale yellow in colouring. It is classified as a monounsaturated fatty acid, which is the main component of food fats, oils and fat deposits in both animal and man. Aside from the work that they do within the body, these fats are less vulnerable to spoilage than other fats, making them a useful alternative in food preservation.

This surfactant is widely accessible in nature, as highest sources of Oleic acid are found in avocados, olive oil, table olives and canola oil. Bakery products, as well as soaps and skin creams are prepared using this substance, as they can extend a use by date and make these products safe for longer periods, even without refrigeration. It is also a reliable ingredient within cleaning agents, used as an emollient in the manufacturing of soaps and detergents.

The castor oil surfactant is one of the most commonly used nonionic compounds in oral, topical and pharmaceutical formulas. They are utilized in the production of aqueous liquid preparations, as well as emulsifying or solubilizing agents. It is a plant-derived oil that is obtained from the seeds of the Riconus Communis plant, as a mixture of triglycerides composed of several different fatty acids. The major component of Castor oil is Ricinoleic acid, with other compounds including oleic, linoleic, stearic and other organic acids.

Castor oil is known for having a high standard of lubrication, as well as its firm-forming mechanisms that make it an excellent ingredient in skin creams and some hair products. Its chemical structure also allows it to become a humectant, which results in the attraction of water to hair and skin. Its viscosity levels are high, which makes it useful when trying to thicken products.

Polyethylene Glycol is considered a synthetic polyether that can be readily accessed in a range of molecular weights. Materials with Mw <100,000 are usually called PEGs, while higher molecular weight polymers are classified as PEOs.

PEG is soluble in a number of liquids, including water, methanol, ethanol, benzene and dichloromethane, making it non toxic and widely approved. They are useful in a number of pharmaceutical contexts, as well as in food, industrial manufacturing and cosmetics.

Polypropylene Glycols are clear, viscous liquids with low pour points. Considered as polymers of propylene oxide, their viscosity increases and water solubility decreases with increasing molecular weight. At room temperature, the polymer is a liquid. However, solubility in water decreases rapidly when the molar mass is increased.

Our friendly experts are always more than happy to help. To contact us: